The Professionals Use Newspapers to Connect with Fans 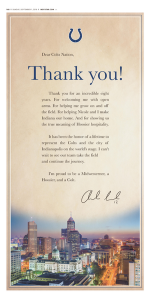 Your Favorite Sports Hero Wants You to Read the Newspaper

It was a sad morning in Indianapolis. Just days earlier, word had spread that Andrew Luck, the popular quarterback of the Indianapolis Colts, would be giving up the game he loved, an unexpected retirement. It all happened in a blur, from a team source leak to an explosion of reports and commentary via the Twitter-verse and a subsequent harried news conference during a preseason game. No matter your opinion of Luck or the situation in general, it all lacked a feeling of closure.

Segue to Sunday, September 1st, and a letter in The Indianapolis Star, the hometown newspaper of the Colts.  Why here? Why now? The whole world has been talking about this issue for an entire week already. Yet something about seeing Luck’s thoughts, reasoning, pain, and gratitude, all laid out on the printed page, represented the required closure to the fans, the city, and perhaps most of all, to Luck himself.

Newspapers are entrenched as the pulse of their respective cities, and nothing echoes more of that voice than the sports teams and sports heroes that each metro clings to season after season. These very papers are hanging on many office and den walls, celebrating championships, keepsakes to cherish the fleeting moments of the biggest and brightest accomplishments. 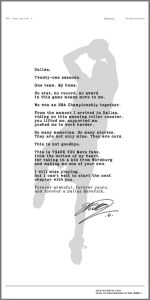 Beyond Sound Bites and Hot Takes

On the flip side, in recent years, newspapers have offered countless sports stars the opportunity to immortalize their careers in a lasting way, a way that today’s sound bites and hot takes cannot seem to capture.

Luck isn’t alone in his approach to have his final professional address appear in a printed paper. Earlier this year, longtime Dallas Mavericks hall-of-famer, Dirk Nowitzki, took out a full-page ad in The Dallas Morning News to reflect upon his career. Some 20 years earlier, Barry Sanders shocked the football world in a similar way to Luck, announcing retirement via a faxed letter to The Wichita Eagle, Sanders’ hometown newspaper. There have been countless others in between, in all major sports leagues, and many more still to come.

In this time of immediacy, gut reactions, and 140-character limits, Luck and other stars are instead choosing something different. A newspaper, particularly in its classic printed form, carries an air of significance. A newspaper is more thoughtful, reflective, and trustworthy. For such an important announcement, it seems fitting to give it more than just a passing glance, to honor a career with depth, contemplation, and class. Call it nostalgic, but our sports heroes seem to have grasped the value of this, and maybe the rest of us should take notice too.

Simplify Your Next Newspaper Campaign

If you want to bring a thoughtful and trustworthy approach to your next advertising campaign, following in the footsteps of numerous athletic giants who had a preference for print, contact MANSI Media for assistance. Our team of skilled media buyers is available to simplify the newspaper buying process and eliminate unnecessary stress. Find the help you need by emailing our team at Help@MANSIMedia.com or by calling 717-703-3000.

See what MANSI can do for you. Enter your information to request a consultation to help with your print and digital placement needs.